a fragment of interior design The Sacrifice Хендмейд 1 / 3 4 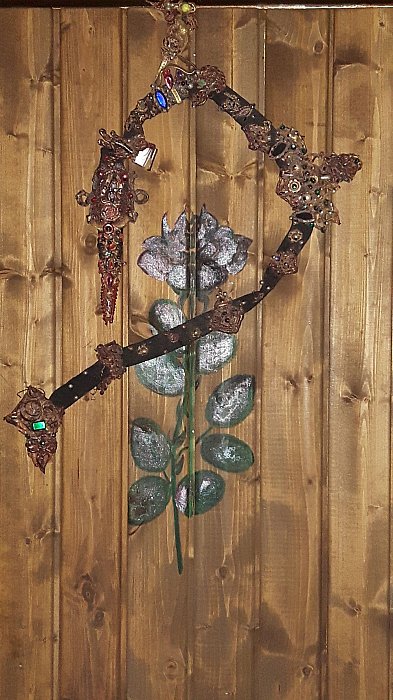 Nadin Victorya Mazpane – a fragment of interior design The Sacrifice
A fragment of interior design. Top 100 SmyART 1st position December 2016 -January 2017. The lost night…it was too cold…it was too dark in my room…just a little flames of fire was dancing in the candles. The lost night was so lonely…I had a bad dream; I would wake up when I felt eyes on me. I had bad feelings…something ancient, unknown; unreal went to my room from the darkness, while I was sleeping in my bed. I saw it…and had its invitation. It said something about my destination, bet I didn`t listen to anything…just went next to event darkness. I went slowly…step by step I went next on the way full of faded roses…first we arrived to the Altar of Darkness with lot tentacles of death behind it. Slowly step by step I joined next to; first I saw the ugly witch’s face when I was in the middle of the Altar. She said “We need your help! Help him! He must to return back! Help to raise him!” She took the ritual knife and cut my hand. I saw how the grey tentacles of death grew the bigger while my blood was running to the middle of the Altar. The witch said “Listen to his voice…he will be by full of live soon! He will be back to us after your sacrifice.” Maybe I was too blind, and lost myself somewhere. The wind blew the words somewhere from the past…”You were by my Universe! If you prefer him, you never return back”. I saw the fragment from my future. I am wearing a long black dress in this moment in future. I’m waiting for him, but, I have been seen him just for a moment. The grey tentacles of death returned my body back to my room. My mission was completed. I woke up in the morning. I was in my bed. It is too cold. I felt nothing in my soul inside. Who I`m now? What I have to do? Maybe…just to pray Heaven return my soul back... mixed, 2016.