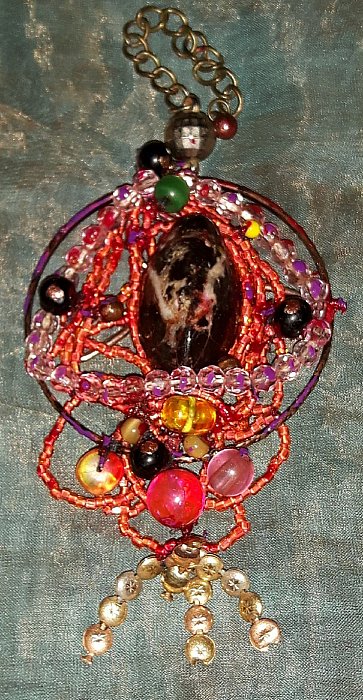 Nadin Victorya Mazpane – Spectral System On The Fire
Modernizm, avangard, mixed...2017. Natural minerals, synthetic minerals, bronze... ...I awoke in the middle of the night…The Constellation of the Great Bear shone in the sky…I looked at the window… I saw the Monument of Liberty…in the middle of the central square…The last night were so silent… The white mist got down from The Constellation of the Great Bear…and I heard some an unknown love her!”…voice said “Please look at me my boy! We need for your help!” The Constellation of the Great Bear became by cloudy mirror in my room…and I heard that voice from my dream`s… again…The somebody has called me and spoke my name…I was looking at the mirror and saw the shinning reflection of Destiny…The Destiny held the five stars in the hands… I saw the silver stairway to Heaven…I saw an Angel`s body the injured by the golden arrow of love on the star fire near the golden Throne of The All Stars`…She said “We need for your help…You have to stop the evil Go to the demon world, and fight him!” I heard The Constellation of the Great Bear voice “Let me help you my boy!” I saw the cloudy mirror became by the black door. “Open the door! My boy… “Said the Great Bear…I opened the black door and saw the red carpet and the stairway down…to abyss… See more wwwTHE ART VOICE.com

Thank you Rimma!!! The big black agate in the middle, the ambers around… other natural minerals and bit synthetic minerals.

Thank you Tatjana! Thank you friends!