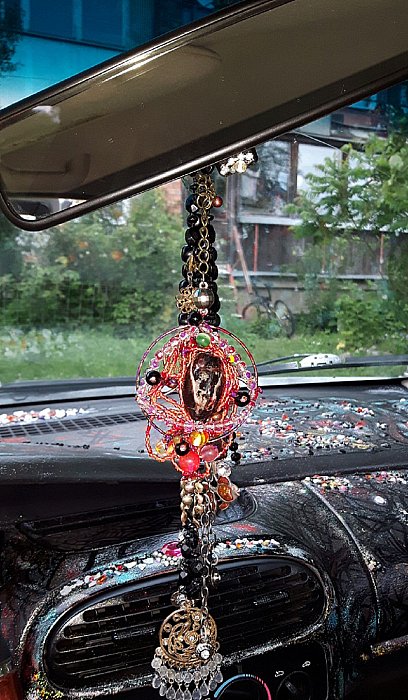 Nadin Victorya Mazpane – The predictions of Destiny
Modernizm, mixed...2017. Natural minerals, synthetic minerals, bronze... ...That who was waiting under the silver stairway`s…The demon, the Lord of darkness…said something…and the two golden arrows injured the Angel`s and the star`s hearts in this moment…an Angel fell near his golden Throne, but the star fell down from the heaven to the demon`s arms. I saw the amazing shining star`s falling from the sky`s to the abyss…and the darkness has followed next to star…The injured by golden arrow star`s body shined by amazing unreal Star Light in demon`s hands…The horrible creature with tentacles followed next to demon to abyss…It has looked at me…first to hide itself in the abyss, and Somewhere in my soul inside I felt the fear…for a moment… The demon has returned to the abyss…he held his bride in his arms…”Be careful!” said the Love…”I have the something to tell you … when I was inside her mind, I saw the one moment from the past…The moment when the Venus got down to the abyss…and she has been readied… to sacrifice herself for a name of love, she looked under the grey dark water…and her reflection alive for a moment, and meantime… the something unknown unreal dangerous…the something that what has been came from the unreal ancient other reality’s, has reborn…in the fragment of her soul…be careful! The fragment of the Venus soul`s lives in her soul, but nobody… from us, knows who is she?! Look at this! This is the unknown symbol from the unknown Stars` constellation …she belongs to unknown reality, but…she is not the Venus…That constellation not exists! I believe she is dangerous for us!” “I know!” said the demon…”but I love her!” See more www.THE ART VOICE.com

Just look at the mirror, you can see the All Stars` reflection…and listen to the predictions of Destiny…